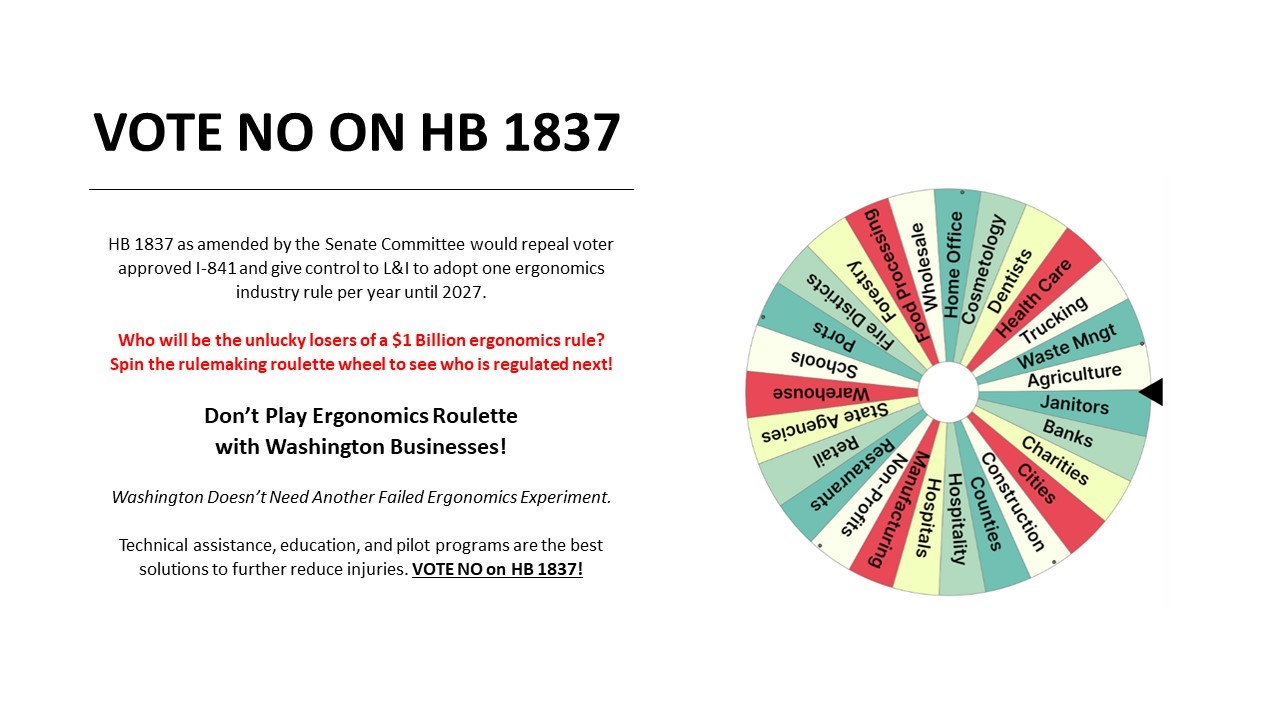 OLYMPIA — Feb. 28, 2022— Washington’s independent grocers and convenience stores are appealing to lawmakers to put down legislation that would add billions to employers already struggling to emerge from the impacts of COVID and the pandemic.

House Bill 1837 would add billions in regulatory costs in the form of sweeping workplace safety or “ergonomics” regulations at a time many businesses are already struggling with the impacts of the pandemic, said Tammie Hetrick, president and CEO of the Washington Food Industry Association(WFIA).

“This legislation could not come at a worse time. Independent grocery stores and convenience stores are barely hanging on after weathering two years of supply chain issues, extra pay mandates, labor shortages, growing rates of inflation brought on by the pandemic. As we have seen with so many other issues, voters already rejected this idea in 2003 with I-841, but lawmakers continue to press on, ignoring the will of the people.”

In 2003, Initiative841 was approved by 53.49 percent of Washington voters, repealing existing state ergonomic regulations unless a uniform federal standard is required. In a challenge to the measure, the state Supreme Court found that the Department of labor & Industries still retained the ability to address egregious workplace hazards. Additional legislation, like HB 1837, is simply unnecessary, Hetrick added.

“Grocery stores, especially family-owned, community stores often provide opportunities for teens and others looking for their first job. House Bill 1837 will likely lead to jobreductions and make our labor situation worse by reducing the hours someworkers are allowed to work. It will also likely lead to more automation of certain positions, reducing employment opportunities. Research conducted by the state’s own Department of Labor & Industries’ own Safety Health AssessmentResearch Program already confirms this,” said Hetrick. “A move toward automation will only help the larger brick-and-mortar and online retailers. It’s the little stores – the mom-and-pop grocers and the small stores that will really get squeezed by this legislation.”

Hetrick added that within the grocery industry, workplace safety programs are already in place to protect workers, provide training programs and other measures that ensure worker safety. This legislation will only add more red tape and layer unnecessaryregulations on employers when they are fighting to stay in business, she said.

“People often talk about the cumulative cost of doing business – this is a perfect example. At some point, businesses will reach a breaking point. HB 1837 just might be it for some of our members, who have struggled to survive the pandemic, only to find more regulations on the horizon. It just doesn’t make sense.”